Another victory for the IBA team!

The "Field Experiences for Active Scientists of Tomorrow" #FEAST Project is underway!

For the third time, a team of geosciences graduate students from the University of Louisiana at Lafayette was named the world's best at determining where to drill for oil. 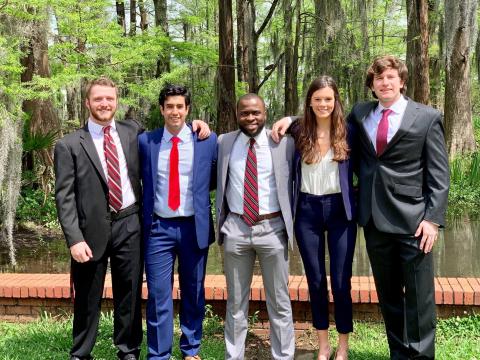 The contest included 168 teams representing colleges and universities from around the world. The team earned a berth in the AAPG’s Imperial Barrel Award international competition by winning the Gulf Coast regional event in March. The University of Houston placed second, and Auburn University was third. LSU, Rice and Stephen F. Austin State universities, and the universities of Alabama and Texas at San Antonio also competed.

That contest, like the international competition, had been scheduled to take place in Houston. Both were held remotely because of COVID-19 concerns.

UL Lafayette has fielded a team every year since the Imperial Barrel contest's inception in 2007. It finished first in 2012 and 2014, and its 2018 first-place finish made it the only team to repeat as champions for the third time, a record that stands. This doesn't place the team in exclusive company, said Dr. Carl Richter, Associated Dean of Ray P. Authement College of Sciences. It's more like a private club.

"This team has achieved a level of preeminence that's not likely to be equaled anytime soon. It reflects the quality of students the School of Geosciences attracts and the strength of our graduate program," Richter said. The team's faculty adviser is Dr. Raphael Gottardi, an assistant professor of geology.

The AAPG's Imperial Barrel Award Program requires students to determine the viability of a prospective oil reservoir. Over eight weeks, they analyzed datasets that included information on the basin's geology, land, geophysics and infrastructure. The team reported its verdict during a 25-minute presentation to industry experts, who selected a winner based on technical quality, clarity and the presentation's originality.

Photo caption: Members of the School of Geosciences’ Imperial Barrel team at the University of Louisiana at Lafayette, from left, are Josh Cecil, Ricardo Penaloza, Samsideen Ajala, Natalie Helm and Gage Hendrix