Research With the Best

Our faculty members are diligently working to look further into the past and figure out how that affects our future.

Study under environmental science and geology leaders  — and you can conduct research alongside them, too.

With our geology and environmental science programs, you won't find yourself sitting in a classroom the whole time you're at UL Lafayette.

You'll be in labs, in the field, and getting your hands dirty. If you want your education to be a hands-on experience, look no further.

Students at UL Lafayette have the greatest classroom in the world for learning about wetland ecosystems and management—Cypress Lake.

By observing, examining, and engaging with this environment, students understand the balance of nature and what humans can do to protect it—and help it thrive.

The UL Lafayette Geology IBA team 2020 is ready to compete in this year's contest. The team members (from left to... Read More ➝
February 10th, 2020 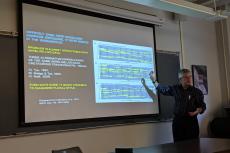 The new amazing Seminar Series is live for Spring '20

The sustainability of energy and environmental resources are two of the biggest scientific challenges we face nationally and globally. Our goal is to equip you — the next generation of scientists — with the tools you need to work in these fields and address our complex problems. You will learn it all in south Louisiana, where petroleum exploration and production are rooted, and where more than 40% of the country's wetlands are.

There's a skyrocketing demand for geologists and environmental scientists. In a place with strong industrial and agricultural traditions, the UL Lafayette School of Geosciences is in the thick of it all.

Geoscience majors enjoy an employment rate of 99.04% nationwide, the third highest rating!
"Geosciences majors, who study to enter careers in earth science, energy extraction, and natural preservation, are among the least likely to be unemployed and some of the best-paid college graduates. The average geosciences degree holder earns $79,851 a year – more than triple the average salary of college graduates. Geoscientists have great future job prospects as there will likely be continued demand for improvements in energy technology" (USA Today).

Our faculty and student-led research is known around the world. Our student team is the only one in the world that has won the prestigious International Imperial Barrel Award three times. We've revolutionized detecting carbon dioxide levels, giving us a way to look 400 million years into the past. We're curators of the Geology Museum, a place to research and exhibit fossils, minerals, and rocks.

We're not lofty academics — we like to get our hands dirty. With our undergraduate and master's programs, you can get your hands dirty, too. 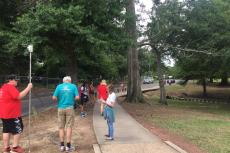 Best in the World for Petroleum Exploration 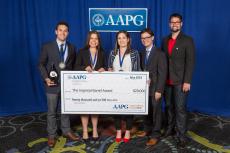 For the third time, a team of the University of Louisiana at Lafayette geology students proved it’s the world’s best at determining where to drill for oil.

UL Lafayette remains unmatched for number of wins at the international competition!