Geophysics Forum on Zoom, March 18th, 11 AM by Ron Kerr

We are very glad to have Mr. Ron Kerr to give a talk on seismic processing at March 18th 11 AM.

One of the most pressing messages that climate scientists attempt to convey to the public is how today’s CO2 levels compare to those of the Geologic past. Such comparisons can provide public context for current CO2 rise, as well as important information on the response of global temperatures to rising CO2. A new study published in Geology suggests that present-day CO2 levels (412 ppmv) are now likely higher than at any time in at least the last 23 million years!

In this newly published study, a team led by Brian Schubert, Associate Professor in the School of Geosciences at the University of Louisiana at Lafayette, used the remains of dead plants to produce a new record of atmospheric CO2 that spans 23 million years of uninterrupted Earth history. Their findings relied on the nearly continuous record of terrestrial photosynthesis provided by organic matter accumulated from partially decomposed plants. 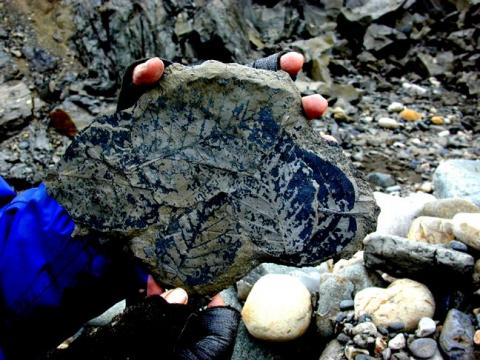 The remains of land plants can be used to calculate the amount of CO2 in Earth’s atmosphere. Photo credit: A. Hope Jahren

Researchers have long known that the current CO2 concentration is higher than at any time in the last 800,000 years, based upon direct CO2 measurements from ice-cores. However, claims associated with the more distant geologic past have been variable, partially based on the lack of a continuous record of CO2 based upon a single method, contributing to public confusion and skepticism.

“The results of this study showed good agreement with data previously published across shorter time periods, suggesting the validity of the approach used here,” says Schubert. Further, he notes, the new CO2 dataset revealed no evidence for any large-amplitude changes in CO2 that might be comparable to the present-day CO2 increase.

Because major ecosystem changes of the last 23 million years did not require large changes in CO2, says Schubert, the research suggests that ecosystems and temperature might be more sensitive to smaller changes in CO2 than previously thought. “The substantial global warmth of the middle Pliocene and middle Miocene, which are widely studied as a comparison for current global warming, were associated with only modest increases in CO2,” he concludes.

This work was supported by the National Science Foundation (grant #EAR-1603051).