Rising water is shaping the future of Louisiana and the Gulf Coast.

Dr. Kinsland published a paper where he shows fossil megaripples created by the tsunami following the Chicxulub Impact. Read it here and below the story of this paper by Kinsland. 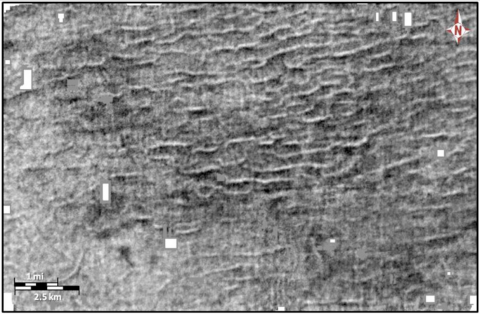 The story of this paper by Dr. Kinsland:

"Several years ago, I had a research group studying the Wilcox Group coalbed methane (CBM) resources of northern Louisiana. Devon Energy supported graduate student research over an area of their leasehold on the border of Winn and Grant Parishes.  I noticed that Devon and Donner Properties owned a 3D seismic survey within the area of the study supported by Devon.  We had been relying on well-logs alone to map the areas prospective for CBM and I, having my geophysical bent, wanted to see whether we could seismically map the shallow Wilcox coals in industry data.  I asked Devon for the upper 2 seconds of the 3D survey.  They gave it to me, and I tasked several graduate students with interpreting the survey for stratigraphy, especially of coals.

Kaare Egegahl was flattening the 3D volume we have using several flattening horizons.  One was especially easy to map at the bottom of the Midway Shale which is below the Wilcox.  Once he flattened the volume using this, and other horizons, he decided to “move slightly up” in the flattened volume to begin interpreting stratal slices.  Figure 1 is the stratal image he saw. He came to me and asked, “What is this?”

I had been studying the K/Pg Chicxulub Impact (the one that most think killed the dinosaurs) on the northwestern coast of the Yucatan Peninsula.  I knew that his image was near the K/Pg, knew the direction from the 3D to Chicxulub, put 2 and 2 together, and exclaimed… OMG. Kaare published the image in his thesis and at GCAGS in a very nice paper. Then I tasked Martell Strong to analyze the data volume to establish that the image is really of the subsurface (not artifacts) and to do a literature search to see whether the mega-ripples could be the result of some geologic event other than the Chicxulub Impact.  Martell produced several other images related to the mega-ripples, reached some conclusions about the variation in character across the image from NE to SW and concluded that he could find no better explanation for the mega-ripples other than Chicxulub.

As I began to prepare the publication, I realized I needed some firm evidence about the water depth within which these mega-ripples formed and were preserved.  Fortunately, I had Robert Ivy’s thesis which included a careful evaluation of the bathymetry of the base of the Midway Shale (the mega-ripple horizon) at the time of its deposition.

I have been blessed here at USL – UL Lafayette for 44 years to have had many outstanding graduate students.  It is through them that our research groups have investigated, geopressured-geothermal resources in southern Louisiana, geophysics and topography of the Chicxulub Impact on the Yucatan Peninsula, the top of salt seismic horizon on  local salt domes, the northeastern boundary of the Gulf of Mexico Basin, CBM in northern Louisiana, the structural/stratigraphic history from northeastern Texas to northwestern Mississippi, surface sourced seismic imaging of “shallow” strata in central Louisiana, these K/Pg mega-ripples and more.